Wikipedia, the free encyclopedia that anyone can edit, is the most prominent online encyclopedia; its flagship English edition is the fifth most popular site on the internet. However, many people are unaware of the popularity of other editions of Wikipedia, built to support other languages and cultures across the globe. These other editions are not direct translations of the English Wikipedia pages. They may cover different topics or present different information for the same topic, as a different set of authors with distinct cultural backgrounds have written them.

In both Spain and Latin American countries, the Spanish and Portuguese editions of Wikipedia have proven very popular. In fact, the Spanish version has the second most participants curating and editing the Wikipedia pages with nearly 5 million people having participated in the creation of the site. PlumX Metrics now highlights references from Wikipedia to your scholarly work from English, Spanish and Portuguese Wikipedia, allowing you to tell an even richer story of the worldwide impact of your work.

It is interesting to see the differences between the Wikipedia editions, and how they refer to scholarly work, in practice. Intuitively, it makes sense that academic content of a more local or regional nature might receive more attention on an associated language-specific platform. For example, this article from a Chilean literature journal, is highly referenced in the Spanish edition of Wikipedia, but not in other editions. 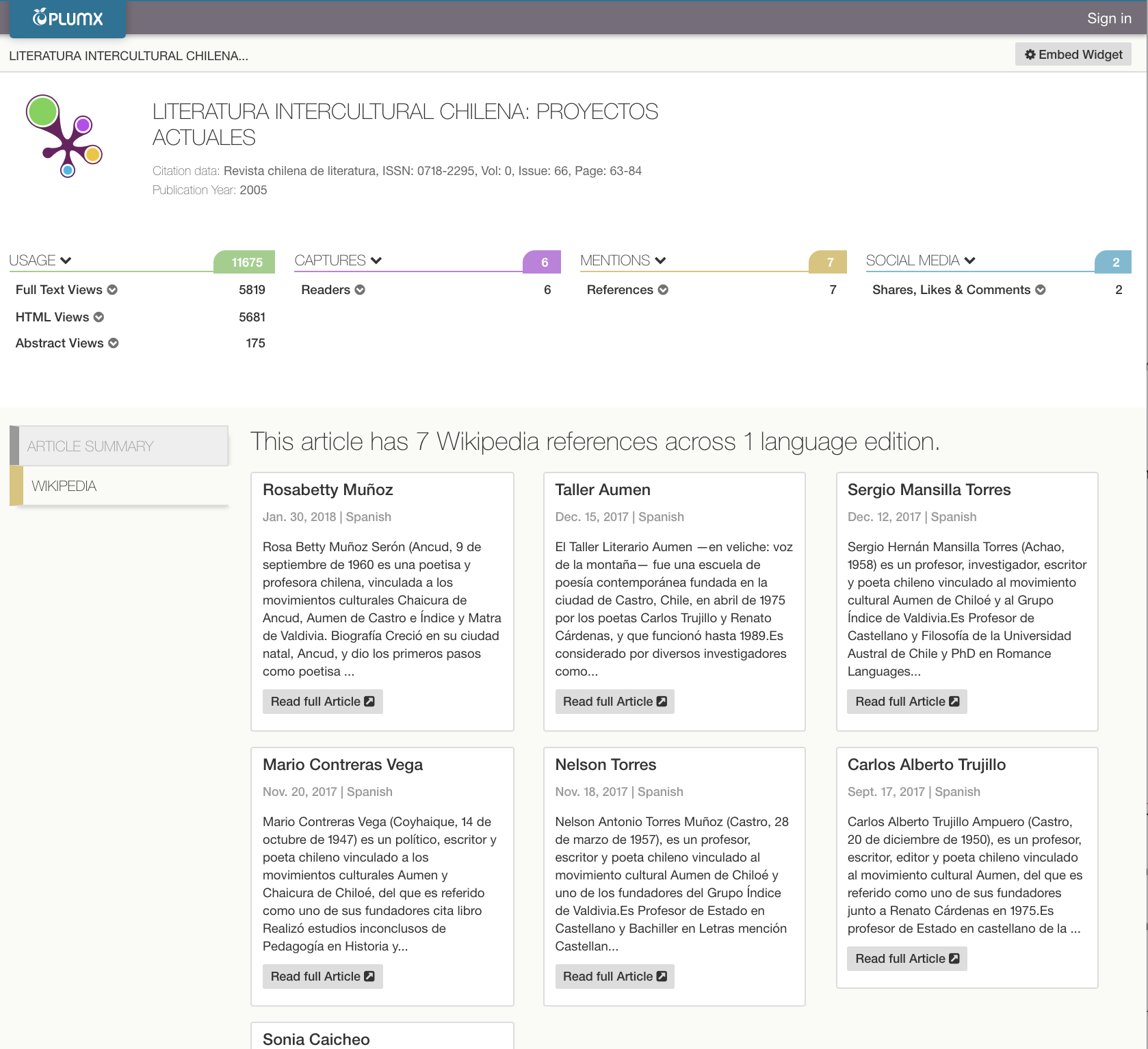 In other cases, cross-cultural interactions with research are highlighted across multiple editions. Consider the interesting case of Brazilian “Terror Birds”: 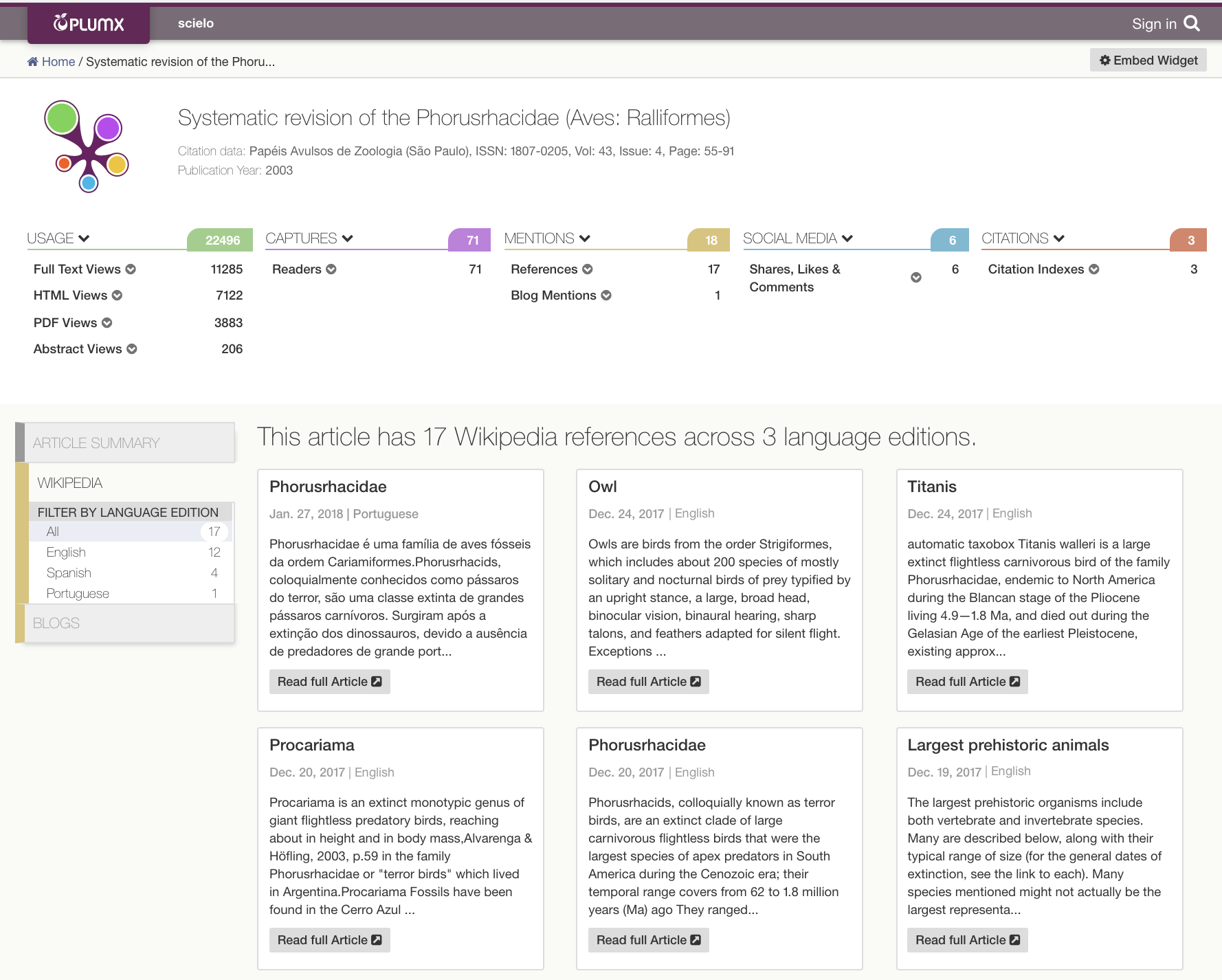 This 2003 article was published in English in a Portuguese journal, “Papéis Avulsos de Zoologia” based out of São Paulo, Brazil on the open-source journal platform SciELO. It concerns Phorusrhacids, colloquially known as “terror birds”:  a genealogical group of large carnivorous flightless birds, now (thankfully?) extinct that were apex predators in South America in the Cenozoic era. The authors of this paper studied fossilized remains across museums in South America, North America and Europe, and even reconstructed some skeletons to get approximations of “the size, body weight, posture and habit” of these ancient animals. As a result of this research, they presented a revised taxonomy of the Phorusrhacida family, including five subfamilies, 13 genera and 17 species in this paper.

In PlumX, it is easy to filter to view the Wikipedia references from each edition to see how different editions have referenced an article differently. Looking at the one reference from Portuguese Wikipedia, we can see the article about the main family refers to this article.

The Spanish and English references are much broader, including references in articles about subfamilies and other species. In general, these editions have more pages devoted to a broader area of subjects, and more depth in the references on each page. Across all three language editions, references to the birds’ height and bodyweight, and to the structure of the family and subfamilies, consistently refer to this article, indicating it is canonical work for these details.

This article is cited in traditional academic citation indexes, but not highly – it has only three Scopus citations. However, looking at how Wikipedia and its different editions reference the article tell a more nuanced story about how foundational this work has been, and the impact across languages and cultures that it has had.