As fall arrives, I’m looking back at some of the conferences and meetings that we attended over the summer. The VIVO annual conference was in Denver in August, and for us, it was both successful and enlightening. The conference centered on people interesting in or already using VIVO and offered a collaborative atmosphere to talk about adopting and implementing VIVO and the opportunities created by advancing data sharing. END_OF_DOCUMENT_TOKEN_TO_BE_REPLACED

Do academics today have to participate actively in social media to stay relevant? While some are skeptical of the value of metrics like blog mentions, tweets and facebook likes being used to measure academic impact, it’s undeniable that academic conversations are increasingly moving online.   END_OF_DOCUMENT_TOKEN_TO_BE_REPLACED

PlumX Gets New View of Tweets

We just launched a new way for users to see the tweets for their research output, also known as artifacts. This new view is accessible directly from a PlumXTM artifact page and shows all tweets that are publicly accessible in reverse chronological order. END_OF_DOCUMENT_TOKEN_TO_BE_REPLACED 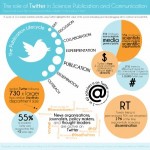 Today I saw a great infographic about Twitter and Science publications.  You can read about the background of it here. In addition to the compelling graphic itself, something that I found interesting, was that the creator of the infographic only shared it directly on twitter to begin with. END_OF_DOCUMENT_TOKEN_TO_BE_REPLACED