Do academics today have to participate actively in social media to stay relevant? While some are skeptical of the value of metrics like blog mentions, tweets and facebook likes being used to measure academic impact, it’s undeniable that academic conversations are increasingly moving online.  Are those staying on the social media sidelines missing out? Must academics tweet or go extinct?

It’s easy to see why micro-blogging tools like Twitter might have initially struggled for adoption in mainstream academia. As pointed out by Steven Johnson in his Time article “How Twitter Will Change the Way We Live”, Twitter does make a terrible first impression: “You hear about this new service that lets you send 140-character updates to your “followers,” and you think, Why does the world need this, exactly?”  Similarly, academics may look at any individual tweet about their work and question the value: in academic circles, many tweets consist simply of a reference to some newly-published article, with at most the work’s title or a one-line synopsis.

But after participating in a live-tweeted conference, Johnson could see the value the platform adds by crowdsourcing a conference synopsis in real time. The value isn’t in a single tweet, but in communities and conversations. Savvy researchers realize that the sum of the attention they get online can be a valuable feedback channel, like a crowdsourced review process. They can see who is listening, from potential collaborators to funders; what pieces of the work resonated loudest with the academic audience; how their work is being used; and even which open questions for further research are driving the most interest.  Of course Twitter and blog sites can also be used to question or even disparage research. Academics who ignore the online conversations going on about their works risk letting their critics speak for them. They’re potentially missing valuable opportunities to defend their research in a public forum and to gain credibility.

At PlumX, we have always resisted scoring individual contributions like tweets or blog mentions beyond counting them; this is because the value of these contributions isn’t so much the individual digital artifacts themselves, but the stories behind them, the picture they paint in tandem with other metrics of how research is being perceived, consumed, used, shared and commented upon and the conversations enabled by that understanding. The stories you’ll find in PlumX are more comprehensive than academics can easily see on their own for two main reasons:

In our newly-released layout for blog posts and tweets, it’s easier than ever to clearly understand the entire narrative of the conversation going on about an article. We make it our mission to uncover these stories to enable person-to-person interactions, whether digital and real-world,  that advance the state of research. 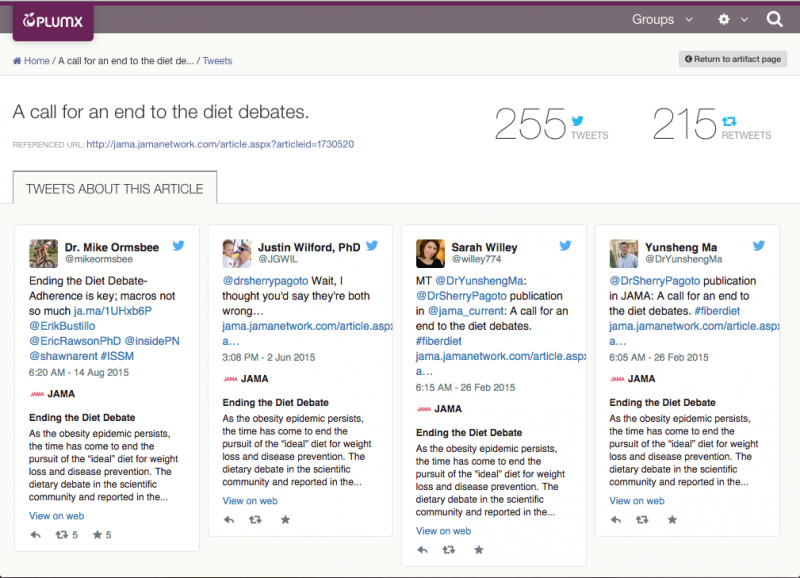 Depending on a researcher’s domain, expertise and even temperament, becoming an active Twitter poster may or may not be for them. They may choose other mechanisms to engage with their communities of research or practice; to each their own, and vive la difference! With blogging and micro-blogging coming of age, the question has shifted: it is no longer “To Tweet or Not To Tweet?”  Instead, researchers should ask themselves: as the digital stories around your work and research are being written online, are you listening?