Wikipedia is the 5th most popular website globally.[1] The online encyclopedia contains about 0.5 – 1.0 million scientific articles, but scientists still rarely cite them as a source of knowledge in their papers. However, this does not mean that they are not reading Wikipedia articles. In a recently published working paper[2], Neil Thompson and Douglas Hanley describe an experiment that focuses on language patterns rather than citations. The authors find that words and phrases from Wikipedia articles are indeed reflected in the scientific literature. 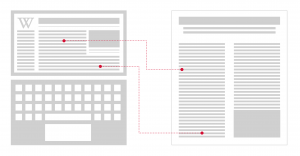 Why Wikipedia is badly cited

There is roughly one Wikipedia article for every 120 scientific journal articles. And while the number of publications that cite Wikipedia has increased over time[3], these occurrences are still very rare considering the size of Wikipedia’s corpus and the popularity of the encyclopedia. Thompson and Hanley describe two main reasons for that:

Language drift as an indicator of Wikipedia’s impact on science

In their approach, Thompson and Hanley focus instead on text-mining techniques to measure the correlation of language between Wikipedia articles and scientific papers. In particular, they look for similarities in word patterns and how these change over time. They determine the natural drift in language caused by the introduction of new terms into a field as roughly one new term for every 250 words.

When looking at journal impact, the influence of Wikipedia is more pronounced in less-cited journals. Top journals show only a small impact from Wikipedia. This makes sense, as those articles usually describe new-to-the-world science. However, once these ideas get reflected in Wikipedia, they then shape follow-on research.

The authors also analyzed whether the income level of a country influences the effect of Wikipedia on the scientific literature, using the GDP per capita as a proxy. The findings show that the effect is strongest in countries with lower income, where scientists may have less access to traditional scientific information. These results suggest that public resources such as Wikipedia help in extending access to science for those with less resources.

Ultimately, authors of scientific publications that are referenced in Wikipedia can embrace their contribution: By making their ideas accessible to the public, they help shape the science of tomorrow.

Other posts by Christina Lohr